iten
Home
The winery
The winery
Our team
Our terroir
Our philosophy
Vineyard Wines… practically
Our support to territory
WINELNESS, all the good things of a glass of wine
Winery visit
Our wines
Our wines
Red
White
Sweet
Rosè
Sparkling
Spirits
Reviews
Photos
News & events
News & events
Publishing
Where we are and Contacts 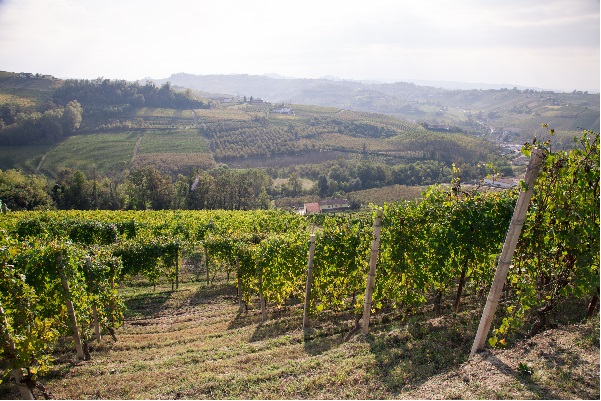 Vintage 2017 will be remembered as one of the warmest years of the last decade. This can be observed  analyzing some graphs regarding temperature and rainfall.


The heat summation graph shows the total amount of energy available to the vine in the vegetative period (April 1-September 30). The value reached in 2017 is 2422.9 degrees per day. 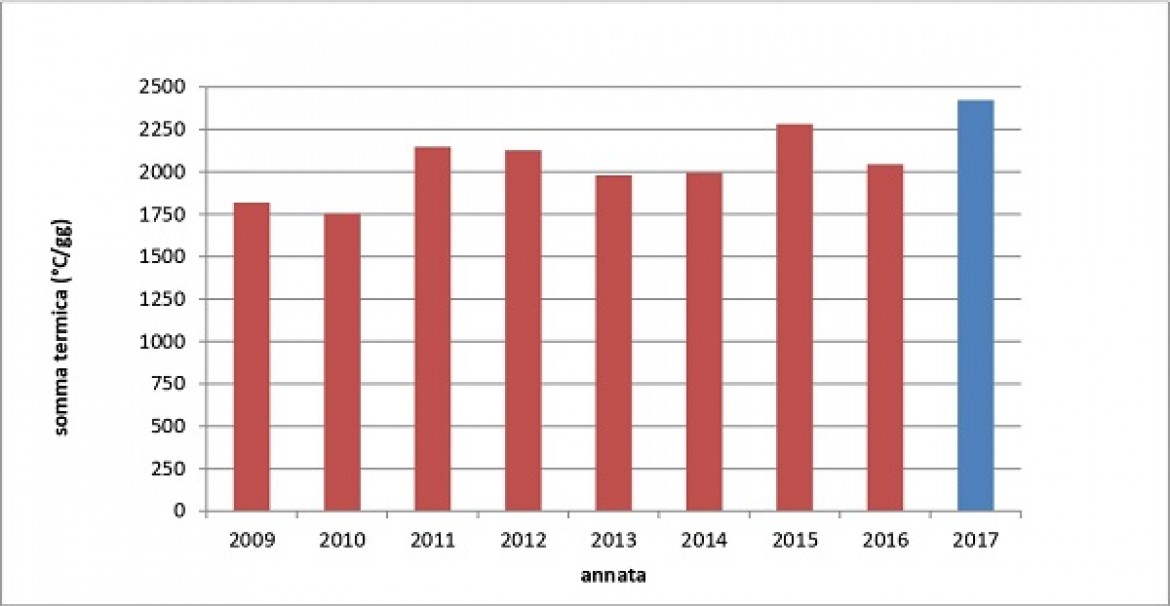 It is important to observe the trend of the last nine years which shows a progressive and constant increase of the heat summations. The amount of rainfalls in 2017 (Fig. 3) was of 442.4 mm, which means a 307.9 mm of rainfalls less than the average of the last six years. In particular, during the summer, rainfalls were very poor: half than the normal trend.

However, the factors that influenced the harvest the most are:

As for the phenological aspect, the very early budding exposed the vines to a significant risk of frosts. As a matter of fact, the damages caused by this hydrometeor to agriculture throughout Europe had been enormous. Nevertheless, the consequent hot and dry climate trend led to a rapid growth of the sprouts. The excessive heat, with very high summer temperatures, combined with the low amount of rainfalls, led to a stop in the growth of the shoots, with symptoms of drought that affected most of the vineyards, especially in the sunniest positions. In addition to frost damages, noteworthy hailstorms have also led to a significant drop in production.

From the phytosanitary point of view, the vintage was rather easy to manage with regards to downy mildew (Plasmopora viticola). Already from June on, the numbers of treatments against this pathogen decreased considerably. As for powdery mildew (Oidium tuckeri), there had some apprehension due to the hot climate trend, although, with a careful management of the treatments, it was possible to easily control the pathogen.

The aforesaid weather conditions led to early harvest. It began with the harvest of Chardonnay grapes during the last ten days of August, followed by Moscato variety. During the first ten days of September, Arneis and Dolcetto were harvested, then lastly Barbera and Nebbiolo (last ten days of September). Nebbiolo grapes were harvested at least two weeks in advance than usual. As a matter of fact the harvest period ended in the first week of October. Luckily, the late ripening varieties, such as Barbera and Nebbiolo, benefited from a mild September, characterized by “standard” temperature ranges which significantly helped the phenolic and aromatic ripening of the grapes.

Because of late frosts, drought and hailstorms, 2017 production dropped down to 35-40%. It’s anyway worth to note that hail – which happened quite early - affected only the quantity and not the quality of the product.

Despite the climate issues, vintage 2017 fully met the expectations and gave organoleptically fine and structured wines.

VINTAGE 2017: WARMTH AND DROUGHT
Report on the 2017's climatic trend in our territory.
Our wines
Our vineyards